Callie Rogers and Tracey Makin became the UK’s youngest lottery winners. Both girls were only 16 years old when they hit the jackpot. Callie won her jackpot in 2003 whereas Tracey won hers in 2008. Life as winners were different for Callie and Tracey despite the two girls sharing the same age at the time of winning. 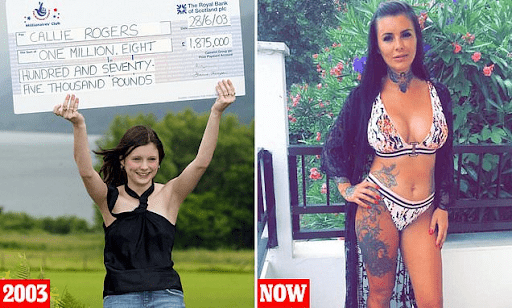 Image Of Callie Rogers by The Daily Mail

Some young jackpot winners may have a different mindset and are clever with their finances. On the other hand, there are young winners who will spend frivolously until they are bankrupt. Find out which teenage winner had it all figured out and how much Callie and Tracey won in my article.

Callie Rogers and Tracey Makin – Life Before the Win

Callie Rogers and Tracey Makin didn’t have much experience in life when they won their jackpots. Rogers worked at the Co-op in Cockermouth, Cumbria before she became a winner and lived with her foster family.

Tracey lived in Belfast with her parents before winning her jackpot and attended Lady of Mercy school in Belfast. Makin was studying for her GCSEs at the time.

How Much Money Callie Rogers and Tracey Makin Won? 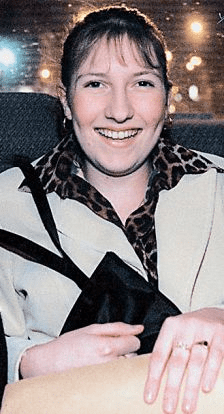 Tracey Makin chose her numbers carefully for her ticket. She used family birthday dates for her winning lottery numbers. This is a lottery jackpot strategy most players use when they don’t know which numbers to pick.

Callie Rogers had the same strategy. Rogers chose her numbers based on the birthdays of her foster family. Her winning numbers were 1, 10, 17, 23, 29, and 35. She was one of eight winners of the National lottery in 2003.

Callie Rogers was jumping and screaming when she realized she had become the UK’s youngest jackpot winner. When the draw took place, Callie was dog sitting for a friend. She stated that she rushed home to check her numbers. In a press conference,  Callie stated she was excited for winning because it meant that she could travel, which is something she always wanted to do.

At first, Tracey Makin thought she only matched four numbers and was happy with winning the £53 prize. She realized the next day that she matched all six correct numbers. In an article by Independent, Tracey stated, “I was happy enough with the pounds 53. I didn’t really want a million. But I’m coming round to the idea now.”

What Did Callie Rogers and Tracey Makin Do with the Money?

Callie Rogers first said that she wouldn’t spend her money unnecessarily. She wanted to hire accountants to assist her financially. Unfortunately, like many lottery winners, money soon changed Callie and she started spending frivolously.

Tracey was a bit more wise with her winnings. She invested most of her earnings. When she won her jackpot all she had bought herself was a Janet Jackson CD. Tracey also said she wanted to buy her brother a new car. She credits her parents for teaching her how to remain sensible. 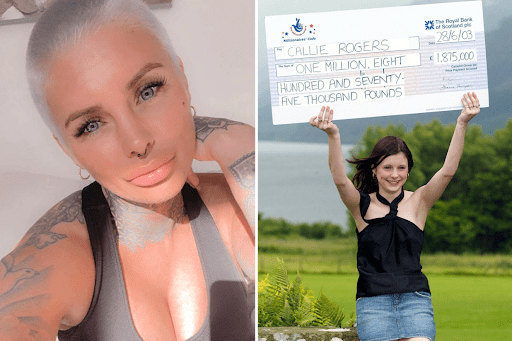 Image of Callie Rogers by The Sun

Where are Callie Rogers and Tracey Makin Now?

According to the Daily Mail, Tracey Rogers is now living a modest life. She has an office job and a car and invested most of her winnings. Callie Rogers suffered after winning her jackpot. She experienced bankruptcy after blowing her winnings.

Callie Rogers is now petitioning for the National Lottery to increase the age limit for lottery players because she stated that winning the lottery at such a young age destroyed her life. In an interview Callie stated, “It was too much money for someone so young. Even if you say your life won’t change, it does and often not for the better.”

News platforms such as The Mirror have used images of Callie Rogers from her Instagram account so she does have social media. However, it’s difficult to find her online. This could be that her account is private. Callie Rogers also has a Facebook account where she posts pictures regularly.

Tracey Makin may have social media accounts but I’m yet to find them. She may also have set her accounts to private.

What Callie Rogers and Tracey Makin Could Have Done Better?

Tracey Makin seemed to have more guidance when she won her jackpot. She had her parents that encouraged her to finish school and invest her money. Tracey also had psychologists to warn her about con artists and men who would try to court her for her money. Makin seemed to have made better choices as she is living a modest life and has invested her winnings.

On the other hand, Callie Rogers didn’t stick to her plans to hire accountants to assist her. Instead, she spent all of her money on drugs, makeup, plastic surgery and tattoos. What she should have done is put her money away and planned for her future accordingly.

Callie should never have told anyone about her lottery win because it attracted the worst sort of people.

Young lottery winners such as Callie Rogers and Tracey Makin should consider paying for tertiary education and seeking the advice of financial advisors to help manage their finances effectively.

No, Callie Rogers and Tracey Makin are not related. They live in different parts of the UK and have completely separate lives from one another.

How old were Callie Rogers and Tracey Makin when they won the lottery?

Callie Rogers and Tracey Makin were both 16 years old when they won their jackpots. However Callie is six years older than Tracey as she won her jackpot in 2003 and Tracey won hers in 2008.

Do Callie Rogers and Tracey Makin still have money?

Callie Rogers doesn’t have any of her fortune left because she spent all of it and is now living on government grants. On the other hand, Tracey may still have some of her money after investing her winnings.

Callie Rogers stated that winning the lottery was the worst thing that could have happened to her. However, when she first became a winner she got to travel a bit and see the world. Unfortunately, Callie made the tabloids for the wrong reasons and soon became a lottery winner who lost it all.

Many people say that the UK’s National Lottery should increase the age limit for players. This is so young people don’t have to fall victim to the temptations of having too much money. I think that teenagers would handle their finances better depending on their upbringing and the mentors they choose to listen to.

With that being said, I hope that other young lottery winners will learn from the article I’ve written and choose Tracey Mankin’s way of handling finances.