Colin and Christine Weir were the biggest lottery winners in the history of Scotland back in 2011. They quickly became a famous couple in Europe thanks to their EuroMillions jackpot win. But the couple’s limelight quickly turned sour after they decided to split up after 38 years of marriage.

Image by The Sun

Unfortunately, winning the lottery doesn’t guarantee that you’ll be protected from life’s challenges.

It would seem that many couples who win the lottery experience some hardships along the way. I found that Colin and Christine’s story was an interesting one because of the way they handled their situation. Find out how much the couple won, where they are today, and how they spent their winnings. You may find some inspiration from Weir’s lottery story.

Colin and Christine Weir – Life Before the Win

Colin and Christine Weir lived in a £220,000 house in Ayrshire, Scotland. They also had two children who are now in their 30s. Christine was a former psychiatric nurse and Colin was a cameraman at STV. The couple got married in 1981 and were together for 38 years.

How Much Money Did Colin and Christine Weir Win?

In 2011, Colin and Christine Weir became the biggest winners in Scotland after winning £161 million in the EuroMillions lottery. The Weirs immediately took a spot on the Sunday Times Rich list thanks to their jackpot win.

EuroMillions has a rollover feature on their jackpot so in 2011 it was transferred to the next round at least 14 times! This is when the lottery reached its peak of £161 million. This is when Colin and Christine decided to try their luck with the lottery.

Colin and Christine Weir knew how large the EuroMillions jackpot was so the couple decided to buy five Lucky Dips. The Lucky Dip is EuroMillions’ quick pick or randomizer feature. One of the tickets had the winning jackpot numbers of 17,19, 38, 42, 45, and bonus numbers 9 and 10.

They didn’t have a solid strategy that other famous lottery winners had such as Richard Lustig. The Weirs simply purchased their Lucky Dips and left it up to lady luck. Well, fortune definitely smiled down on Colin and Christine Weir because they became one of the richest couples in Scotland after their big EuroMillions win.

Colin and Christine were in their usual routine when they found out they’d won the EuroMillions jackpot. According to Christine, she was relaxing with Colin and watching CSI. Before bed, Christine decided to check the EuroMillions lottery results on Teletext.

Mrs. Weir stated in a press conference that she was going through the numbers and she wasn’t having much luck with the first lines she checked. Then she got to the bottom line and saw that she had every single number from the draw. She checked them four times to make sure she had the correct numbers. She quickly went downstairs to ask Colin to check the numbers too.

After Colin confirmed that they had the winning numbers the couple were full of adrenaline and excitement. They popped open a bottle of wine to celebrate. The couple decided to have a press conference to reveal all the details of their win.

What Did Colin and Christine Weir Do with the Money?

According to news reports, Colin managed to get through half of his £80million in only eight years! That’s a lot of money to spend in such a short time. The Weirs bought houses and cars for both their children who were in their thirties at the time.

The couple also spent a considerable amount of money upgrading their home. They also spent £3 million on a mansion. Colin also owned £212,000 worth of jewelry, furniture, and artwork.

But Christine and Colin didn’t simply spend their large fortune on themselves. The couple were extremely generous with their winnings and gave a considerable amount of it to charities. They established The Weir Charitable Trust to secure funds for local athletes. Colin and Christine also supported Independent Scotland by donating £3 million to them.

What’s more, Colin was a major fan of Patrick Thistle and so he made a £1 million donation to the club.

Where are Colin and Christine Weir Now?

Unfortunately winning the lottery doesn’t always lead to happiness. After 38 years of marriage, Coline and Christine decided to get divorced. The couple started drifting apart and stated that they both wanted to live different lives. The couple ended their marriage amicably in 2019.

Christine then sold their £3 million mansions and moved to a house by the beach. Unfortunately, Colin suffered from many illnesses and sadly passed away in December 2019. Colin was 71 years old when he died.

There are no reports of Colin having social media accounts before he passed away. Christine also doesn’t seem to belong to any social media platforms. However, there were scam emails circling around with people claiming to be the couple. Police warned internet users not to give out personal details to anyone claiming to give away money. 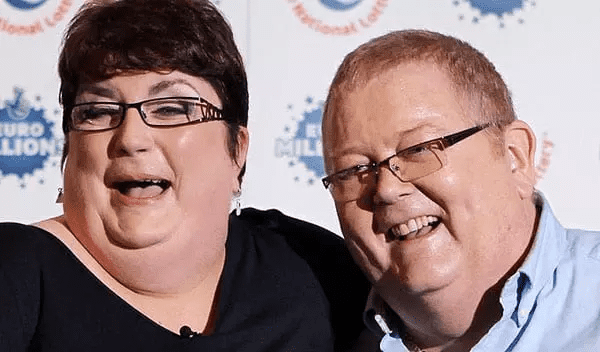 Image by The Steeple Times

What Colin and Christine Weir Could Have Done Better?

Even though Colin spent half of his jackpot share, he still made smart investments. According to the Daily Mail, Colin invested at least £50,000 in National Savings and premium bonds. Colin also loved horses and became part owner of three thoroughbreds who became syndicates.

According to the Scottish Sun, Christine is in support of campaigns that would help millions of young females around the world. She became a founding patron of Prince’s Trust Initiative.

Although the Weirs were lucky with money and they seemed to have invested and spent their money wisely, they weren’t so fortunate in their marriage. Would they have stayed together if they didn’t win the lottery? No one would know for certain. But at least Colin got to live his last few years doing what he enjoyed.

What is Colin and Christine Weir’s method?

Colin and Christine Weir didn’t have a specific method for winning the lottery. They simply bought five EuroMillions Lucky Dips and left it up to luck to win the jackpot.

What happened to Colin and Christine Weir?

Unfortunately, Colin passed away at the age of 71 in 2019. However, Christine is still alive and well and using her fortune to support her community. She still supports many charities by donating money to them.

Did Colin and Christine Weir give money to their family?

Yes, Colin and Christine were extremely generous with their winnings. Christine bought houses for her six siblings and the couple split at least £40 million among family members.

Colin and Christine Weir gave away millions to charities and support their families financially. This simply goes to show how kind and generous Colin was when he was alive and how dedicated Christine is to helping her community still to this day.

Even though it was sad that Colin had passed away and the Weirs’ marriage didn’t last, they still lived their lives to the fullest and made smart investments along the way. The Weir children were also extremely fortunate because they got houses and cars after their parents won the jackpot.

We hope you enjoyed the story of Colin and Christine Weir. If you were in their shoes what would you have done differently? Leave us a comment below with your thoughts.

theLotter
4.3 rating
Earn VIP points and up to 20% of discounts by playing the world's biggest lotteries!

LottoAgent
4.3 rating
Get 10% off your purchase with a unique MYLOTTOGUIDE promo code.