With most popular lotteries, winning the jackpot is one in a million. But if you’re smart and know some mathematical theories you may just crack the code. That’s what Stefan Mandel did. This Hungarian mathematician is famous for winning the lottery 14 times. 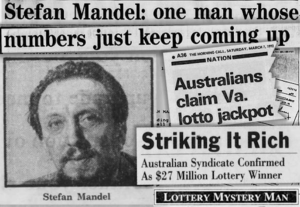 Mandel figured out a way to keep winning the lottery before online lotteries became popular. What makes Stefan’s story even more intriguing is that he didn’t simply win the jackpot. He also won prizes from all the other tiers too! Read on to find out what Stefan’s strategy was and how much money he won from all of his wins.

Stefan Mandel – Life Before the Win

Stefan Mandel was born in Romania in 1940 but into a Jewish family. Although his family struggled financially, he still managed to go to college and graduated with a bachelor’s degree in Economics. He then went on to work for a coal mining company and earned about $88 per month.

While working, Mandel knew there was something more to life than working hard and having nothing to show for it. So he decided to form a small lottery syndicate with four people. During his time at the mining company, Stefan developed a formula that would help him and his syndicate win the lottery.

After winning the lottery, he had enough money to move to Israel and then to Australia.

How Much Money Has Stefan Mandel Won?

Stefan Mandel’s first lottery win was when he lived in Romania. He beat odds that were 1 in 14 million. He was only aiming for the second prize win that required five numbers but surprisingly won the jackpot instead.

Mandel won over 72,000 leu which he stated would have taken him over a decade to accumulate at his job. He split his winnings with his syndicate and started traveling. He then moved to Australia where he became a legal citizen.

He now had access to the UK and Australia’s lottery systems. While living in Australia he won the lottery 12 times. Because of Stefan Mandel, the Australian Lottery had to change many of its rules that made it impossible for the player to continue with his streak of wins.

So he went to America where Stefan decided to play the Virginia Lottery.

The first time Mandel won the lottery, he used a system that he called “the theory of combinatorial condensation” which is a number picking algorithm. To use this system you’ll need to play every possible combination to win the game.

For example, if you play a 6/40 lottery game you’ll have 3,838,380 possible number combinations. With his group of syndicates, Mandel bought every single lottery ticket and used all possible combinations. He bagged his first win with this strategy.

The Reaction Of Winning The Jackpot

After winning his first lottery, Stefan Mandel realized he could use his strategy with other lotteries. He even invented an automation system using computers to use his algorithm to fill out his tickets automatically using all possible combinations.

Since Australia changed its lottery rules Mandel needed to find another way to play the game. So he set out to play the Virginia Lottery because it only had 44 numbers. This meant that there would be fewer combinations to work with.

Stefan then went on to set up a company called Pacific Financial Resources so he could create a trust called International Lotto Fund. He got thousands of investors to put money into the fund. Mandel hired people to print out 7 million tickets every three months and then he would mail them to the US.

Using his formula Mandel not only won the $27 million jackpot but he also won second and third prize tiers too! He also made his investors $30 million.

What Did Stefan Mandel Do With The Money?

Mandel spent most of his money investing in his lottery business. He also promised all of his investors a hefty payout but they got less than what they were promised. In 1995 Mandel filed for bankruptcy.

Where is Stefan Mandel now?

According to news reports Mandel was arrested in Israel in 2004 for fraud. After his release, Mandel moved to the South Pacific island of Vanuatu. On his LinkedIn page, it shows that Mandel lives in London but there isn’t any indication if he still stays in the UK.

There is one book in particular that features Stefan Mandel. The book is called How To Be A Lottery Winner: Strateague Lotto Gambling. The author interviewed some of the biggest lottery winners that feature Mandel and Richard Lustig to gather strategies and tips for people who want to play the lottery.

Stefan Mandel is also currently preparing to publish a book where he will reveal his experiences with playing the lottery. Perhaps readers will find out if there was something Mandel wished he had done differently. I’m sure there are plenty of people who are curious to know what he’s been up to all these years.

What is Stefan Madel’s method?

What happened to Stefan Mandel?

Stefan Mandel is in his 80s and is currently working on publishing his book. Last reports showed that he stayed in the South Pacific island of Vanuatu but his LinkedIn shows that he stays in London.

Can you use Stefan Mandel’s strategy?

There’s no doubt that Stefan’s strategy and his plan to win his 14 lotteries worked well for him. But in the end, he still ended up bankrupt. He also ran into trouble with the law and got arrested for fraud in 2004. While his methods for playing the lottery were 100% legal he frustrated lottery agencies and eventually they decided to change their rules.

However, there are other lottery strategies you can use that are not as expensive and tedious compared to Mandel’s method. You can use Excel to generate lottery algorithms or you can use a computer to generate your combinations for you.

I hope that this article inspired you to use critical thinking and strategies when playing the lottery. Always budget for your tickets and be sure to try out other ways of winning.