Government Lottery India – How To Play Legally in 2022

In general, any form of gambling in India is illegal. On the other hand, the Central Government gives authority to all state governments to formulate rules and regulations on lotteries (in accordance with the Lotteries Regulation Act 1998).

So how do players in India enjoy popular lotteries from around the world? Well, any state government in India can have lottery draws. However, they must meet specific requirements. As a player living in India, you’ll find valuable information about the legality of lotteries in India and which games are the best to play. Keep reading to find out more!

The Legality of Lotteries in India

Lottery draws are legal in 13 states in India but they must meet specific rules and regulations. The state government alone organizes these draws and the draws mustn’t take place outside of this state. Tickets are sold by the Indian state government and all of them must have the state logo printed on the paper.

Furthermore, the lottery must be organized through an authorized agent or vendor. Prizes mustn’t be single digits and no reward will be given on numbers that have been pre-announced. The state government will conduct the draw and any unclaimed winnings will become the state government’s property.

2
Get 10% off your purchase with a unique MYLOTTOGUIDE promo code.
21 games
4.8 rating
4.8
Play Read Review

Which Government Lottery in India Is the Best?

The best government lottery in India will depend on the government state you live in. Some players enjoy Lottery Sambad because it has three draws a day with jackpots between 25 lakh and 31 lakh. Other players prefer the Punjab state lottery because it focuses more on giant bumper lotteries such as New Year Lohri bumper.

Or you can simply play Lotto India because it’s the largest online lottery in India. Draws are held every 6:00 PM IST every Tuesday and Friday. You can Match one ball to win the Free Bet Bonus. Their site states that you can win jackpots that are three times the amount offered by other Indian state lotteries.

As mentioned before there are 13 states in India that organize, conduct, and promote lotteries. In these states, it’s 100% legal for lotteries to take place and for players to take part in the lotteries either online or through vendors.

On the other hand, for Indian players who don’t want to play their local state lotteries or for those who live in states where lotteries are banned, you can play internationally through sites.

The Assam state lottery is called Bodoland Lottery. The tickets are sold offline for up to ₹2. Results are published on the lotteries website which has limited information on it. The maximum prize you can win is ₹5 lakh. Draws are done for lotteries daily from Monday to Sunday at 3pm for all lotteries held in Assam.

There are about 7 lotteries that run in Arunachal Pradesh from Monday to Sunday including Singam Peak and Singam Pinnacle. These are offline lotteries so you have to purchase a paper ticket. Tickets cost ₹6 with a maximum prize of ₹23.03. Unlike other Indian state lotteries this one provides a live stream. Or check the results on their website.

Lottery draws are done three times a day in the morning at 10:55 am, in the afternoon at 3 pm and in the evening at 7 pm. These lotteries are: 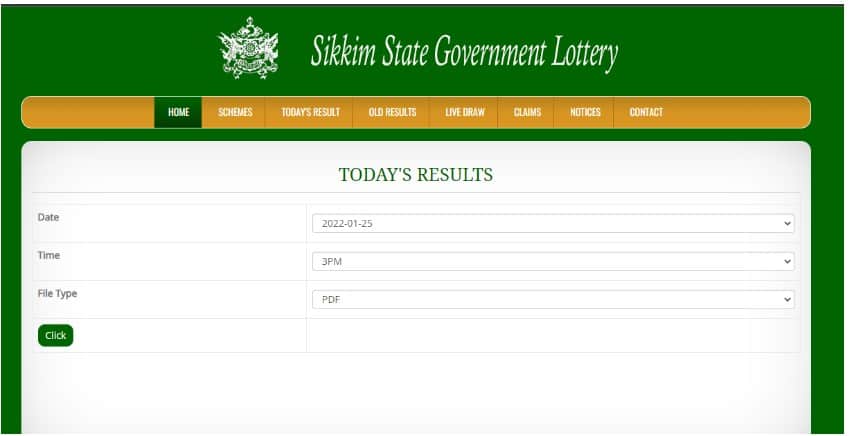 Sikkim has over 14 lotteries for players to enjoy including Dear Smart and Dear Breeze. This state only offers offline lotteries so you have to buy paper tickets. Each ticket may cost you a maximum of ₹2 and you can win up to ₹10,000. The location of the draws is held in Gangkok from Mondays to Sundays. This lottery draws include:

Kerala is another Indian state that has up to 14 lotteries. These are paper lotteries so you can’t play games online. The maximum ticket price is ₹30 with a maximum jackpot prize of  ₹7 Crore. Results for the different draws can be viewed on the state’s official website. Draws are held Monday to Friday and each one has a different name: 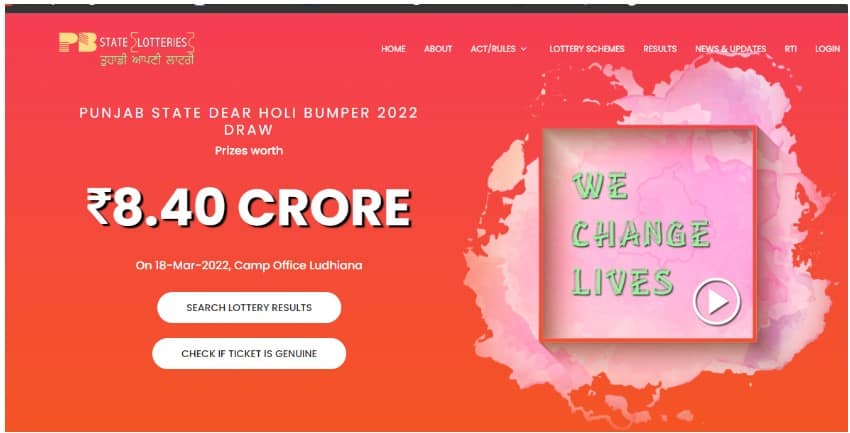 The Indian state of Punjab has over 5 lotteries including Baisakhi and Diwali. All lotteries are offline so you have to buy paper tickets. However, draws are streamed live on the state’s official website. Ticket prices can cost you a maximum of ₹20 with a prize of ₹5.25 crore.

This state only has bumper lotteries on the most important holidays of the year:

Currently, West Bengal is not running any lottery draws. So players can visit Lottery Sambad which is a popular lottery game across many Indian states. Players in the West Bengal state can play Nagaland Lottery games. Tickets can be purchased online which makes it more convenient for players. Prices for tickets can cost up to ₹6. 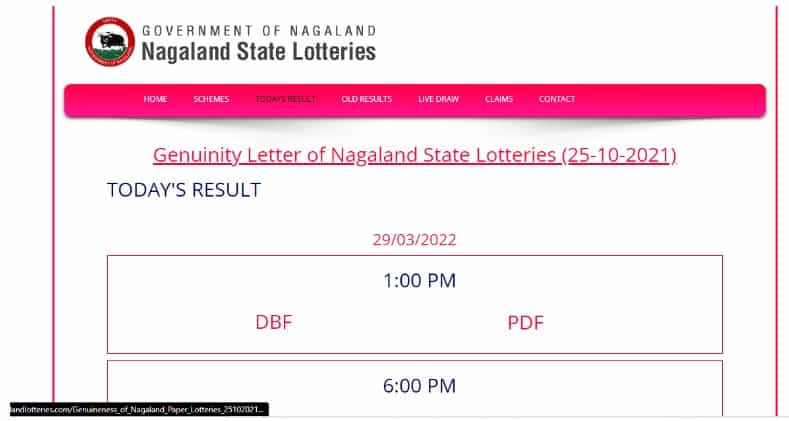 There are three lotteries that are running in the state of Nagaland with draws every day of the week. These lotteries have several bumper draws annually. They are all offline lotteries so you must purchase your ticket at your local vendor. Ticket prices may cost you ₹6. Draws take place three times a day 1 pm, 4 pm, and 8 pm. These draws include:

There are up to 6 lotteries in Mizoram with four of the lotteries held weekly and the Rajshree 500 runs monthly. There’s also the Basant Panchami Bumper which is a fortnight lottery draw. Ticket prices in this state may vary but the maximum price is ₹6 with lottery jackpot prizes of ₹1 crore.

Draws are held every Monday and second Tuesday of the month, as well as every Wednesday, Saturday and Sunday. These draws are:

The Indian state of Meghalaya has a state run lottery. There are three draws a day from Monday to Friday. This is a paper lottery so you can only buy tickets from a physical vendor. Ticket prices are around ₹6 with the highest prize of ₹29 lakh. Draws include the following:

There are around 21 lotteries in the state of Manipur with draws three times a day from Monday to Sunday. Tickets are sold offline by licensed retailers. You can expect to pay ₹6 for a ticket and the maximum prize is ₹27 lakh. They do live streaming on draws and you can view results online or in the local newspaper. Draws include:

There are over 10 lotteries available in the state of Maharashtra. However, all lotteries are offline so you must buy paper tickets from an authorized vendor. Ticket prices are ₹10 and the maximum prize is ₹1 crore. Draws are done four times a day from Monday to Saturday and three draws on Sunday:

There are three daily lottery draws in the state of Madhya from Monday to Sunday. This is a paper lottery so you have to purchase tickets offline. The ticket prices for this lottery are unknown as well as the maximum prize. There is also no official website for this lottery yet. The three daily draws include:

There are up to 5 lotteries in the state of Goa and they have three lottery draws a day from Monday to Sunday. There are also bumper draws set at different times of the year. And the Golden Shreemala Rashi has the largest prize in the state with five prizes of ₹10 lakh each. Ticket prices are a minimum of ₹6. Lottery draws include:

How to Claim Your Prize When You Win The Indian Government Lottery?

Claiming your lottery prize in India can be a tedious process. State lotteries will need identification and other types of documents to prove you’re the winner of the prize. Claiming a prize may differ depending on the state you reside in. Here is a step-by-step guide on how to claim your lottery winnings in India:

Once you have all your documents together you can visit your local lottery claims office to hand in your paperwork.

If you don’t want the hassle of dealing with a long claims process for prizes then consider an alternative to Indian government state lotteries. You can pick from a variety of games online including Lotto India which has drawn every Tuesday and Friday with a jackpot of up to ₹40,000.

Here are other popular lotteries you can play online:

The History of Government Lottery in India

In 1867 the Public Gambling Act banned Indian citizens from organizing, visiting, or taking part in any gambling activities. Laws only started to change a century later. In 1967 Kerala became the first state to launch a lottery in India. The state paved the way for more lotteries to open up in India. However, there are states that still don’t allow lotteries including Bihar, Ladakh, and Uttar Pradesh.

Why Are There States in India That Have Banned the Lottery?

There are those who oppose lotteries in India because they believe it’s a form of gambling. Additionally, it could make the poor citizens of India develop a habit and make them even more bankrupt. However, online lotteries such as MegaMillions or the US Powerball are organized by foreign operators which protects them from the laws of Indian legislation.

Indian players can participate in online lotteries if they go through sites such as TheLotter or LottoAgent. Since these online lotteries are not privately owned by Indian citizens they are considered legal.

If you live in India you have a variety of choices when it comes to the lottery. If you reside in a state that has its own government state lottery then you can take part in it. But if you live in an Indian state that has banned lotteries, you can still participate in online games such as EuroMillions or MegaMillions. Simply choose a safe online lottery site such as LottoLand. Use this guide to help you find an alternative to lotteries in India.