Mavis Wanczyk was an ordinary woman who worked at a medical center in Massachusetts. But her life was about to change drastically. In August 2017 she was the sole winner of the US Powerball jackpot. She became an instant millionaire. 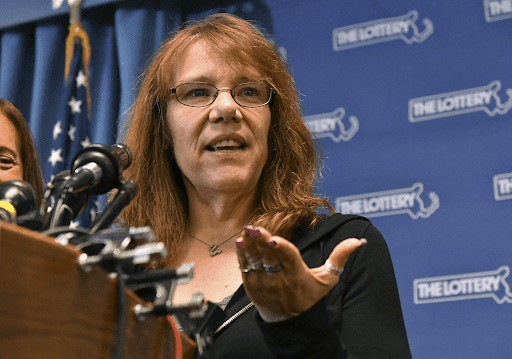 Image By The Boston Globe

The surprising part is she didn’t use a specific strategy to win the lottery. She simply bought her ticket and chose random numbers. What makes this win special is that it was the second-biggest lottery prize taken by a single winner. Keep reading to find out what Mavis’ life was before her win, how much she won, and where she is today.

Mavis Wanczyk – Life Before the Win

Mavis was born in 1964 in Southbridge, Massachusetts. She moved to Springfield with her parents when she was 14 years old. She has never lived outside of Massachusetts.

Before Mavis became famous for her large lottery win she worked at the Mercy Medical Center in Springfield and was in the patient care division for over 32 years. She was also once married to William Wanczyk but got divorced and had it finalized in 2012. He died in a tragic car accident in 2016. William was the father of Mavis’ two children.

After her divorce from William, Mavis met Richard Lord and dated him for 15 years. Unfortunately, Richard and Mavis split up just before her big lottery win.

Mavis lived in a two-bedroom apartment in Massachusetts before she became the second-largest US Powerball winner!

How Much Money Did Mavis Wanczyk Win?

On August 23 2017 Mavis became the sole winner of a whopping $758.7 from the US Powerball. With the US Powerball, players can choose how they want to receive their winnings. You can either choose to get paid a lump sum or the annuity option.

Mavis chose the annuity option where she would get paid out a portion of her winnings yearly for the next 30 years. She was also taxed $120 million according to the US Powerball lottery rules and had to pay an additional $24 million to the state. That cut the prize down to $336 million which is still a large amount of money for one person.

Wanczyk’s win was surprising because she didn’t use a specific strategy to win her large prize. She simply bought her ticket four days before the US Powerball draw at Pride Station & Store in Chicopee.

In her statement at a press conference after her win, Mavis stated that her lottery winning numbers were random. She chose one or two birthday dates and the number 4 which is the number she chooses when playing Keno. Therefore, the numbers weren’t carefully thought out.

There are people who choose their lottery numbers carefully before they play. You can read articles such as Best Lotto Strategies – Tips to Boost Your Chances of Winning! These strategies are fun and provide easy ways you can use to increase your chances of winning the jackpot.

She was in shock after finding out that she had won the jackpot so her friend Rob had to make sure she got home safely by driving behind her.

After winning the US Powerball Mavis appeared for a public conference. She stated that she didn’t believe she had actually won. Her friend Rob told her to sign her ticket immediately so she could go claim her prize.

Mavis also stated that she never thought she’d win the lottery. Wanczyk said, “It was a pipe dream I’ve always had.” Wanczyk’s dream came true because her lottery numbers 6, 7, 16, 23, and 26, plus the US Powerball number 4 were the winning combination.

What Did Mavis Wanczyk Do with the Money?

Financial advisors encourage lottery winners to discreetly claim their prize money and be strategic with their next plan. However, Mavis went against all of that advice and decided to go public with her win. She also quit her job immediately at the Mercy Medical Center.

The reason financial advisors encourage winners to claim their prizes anonymously is that winning a lot of money attracts scammers. Unfortunately, that’s exactly what happened after Mavis went public with her win. There were scammers online claiming that Mavis was giving away some of her fortunes.

When asked what she was going to do with her winnings, Mavis stated that she simply wanted to relax and take a break and figure out what her next move was going to be.

Where is Mavis Wanczyk now?

After some time, the media on Mavis subsided. There were plenty of people looking for Mavis after her lottery win which prompted police to send security to protect her home. According to sources, Mavis stays in a large house with a swimming pool in Massachusetts. She also bought a Ram 1500 truck worth $56,000. There’s no current news on whether Mavis is working and how she’s maintaining her fortune.

Mavis had a Facebook account and was quite active on her profile before becoming a jackpot winner. However, after going public with her jackpot win, there were many fake profiles created claiming to be Mavis. However, anyone claiming to give away money under Mavis’ name is most likely a scammer. People should never give out their personal details to anyone online.

Mavis hasn’t made any recent posts on her Facebook profile so she may have stopped using social media to stay away from the scammers. She doesn’t have a Twitter or an Instagram account either.

What Mavis Wanczyk Could Have Done Better?

Mavis could have protected her identity by not going public immediately after winning her prize money. Winners usually have a three-month period to make their win public but Mavis did it in 24 hours.

She stated that she wanted to get it out of the way so that people would leave her in peace. Unfortunately, her decision to go public immediately after her win attracted plenty of unwanted attention.

Strangers started looking for her home by asking people where she lived. There were plenty of people impersonating her online to try and con people into giving them personal information.

Another way Mavis could have handled the situation better is by setting up a trust to maintain her anonymity. It’s always best to listen to the advice of your advisors when you become a lottery winner.

When Mavis bought her lottery ticket she picked random numbers for her first ticket using dates of birthdays and the number 4 which was the number she chooses when she plays Keno. She also chose two quick picks.

After fake social media accounts popped up in Mavis’ name she stopped using her Facebook account. It’s also not known whether Mavis still lives in her two-bedroom apartment in Massachusetts. She no longer works at Mercy Medical Center.

How much is Mavis Wanczyk worth?

Mavis now has a net worth of $300 million. She is one of the richest US Powerball winners.

Mavis is the second biggest US Powerball winner. The US Powerball odds are 1 in 292 million and she was fortunate enough to be that one lucky person who won the jackpot. She didn’t have to share her fortune with any other winners. All she did was choose her set of numbers and buy two quick picks.

Even though Mavis wasn’t lucky in her relationships she was incredibly lucky with her jackpot win. I hope that Mavis is living a fulfilling life with her children and spending her fortune wisely.

Were you inspired by the story of Mavis? Let us know what you think of this incredible jackpot win by leaving a comment below.