There have been many lottery winners over the years but they were only famous for a short while. However, one player named Richard Lustig became exceptionally well known in the lottery world. He managed to win the lottery seven times! 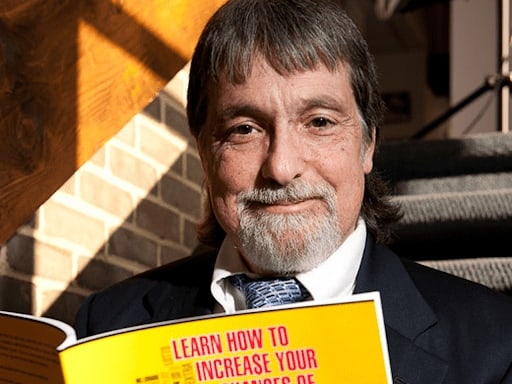 Was Richard simply a lucky lottery player or did he manage to beat the system with a strategy? Richard is the second lottery player to win more than one game. So there must be some sort of formula he used to win his prizes. Keep reading to find out more about this famous lottery player.

Richard Lustig – Life Before The Win

Richard Lustig was born in the US in 1950 and lived in Florida before he became famous. He was also a professional drummer. Back in 1992, Richard faced many hardships. He had plenty of medical bills after his son was born and he had a roof that leaked.

He decided to put down money to buy a scratch card lottery ticket and became $10,000 richer. But, Richard had to spend all the money to pay for the medical bills and fix his leaking roof. After paying for all the expenses there was nothing left of his winnings.

Richard then made it his mission to win more money from the lottery.

How Much Money Did Richard Lustig Win?

In January 2002, just four months after his latest win, Richard won his biggest prize. He won the Florida Mega Money jackpot of $842,152.91. He went on to win the Florida Fantasy 5 twice:

All seven of Richards wins added up to over $1 million after taxes.

Richard claims that he spent many years developing his own strategy to win the lottery. But during interviews, Richard mentioned a few strategies. One of the methods is using the same numbers over and over again. In the law of probability, your numbers are most likely to show up in the next draw the more you play them. This is also known as the law of large numbers.

Lustig also mentioned never to trust quick picks which sparked plenty of controversies. He recommended choosing sequential numbers. Always handpick your own numbers and have a sequence of two or more rows of numbers on your ticket.

During a KCRA News interview, Richard revealed another one of his methods. He also advised setting a budget to buy lottery tickets and avoiding spending your rent and grocery money. Then take your budget and divide it by 10. So if you have $100 you’re going to buy 10 tickets that cost $10 each from the same lottery game. Then play the same numbers on each ticket.

However, this method isn’t guaranteed to work. But it’s one lottery strategy that you can try. If you want to try another method you can choose one of these best lotto strategies.

The Reaction Of Winning The Jackpot

In a Time article, there is a quote from Richard, “I’ve been rich and I’ve been poor, and I like rich a whole lot better.” Lustig also stated that winning the lottery changed his life. The first win helped Richard pay off debt and fix his house so it was a blessing for him financially.

Richard Lustig lost many times before he won his lotteries. He decided that there had to be a better way to improve his chances of winning. According to ABC News, Richard treated playing the lottery like a job and required many hours of dedication to play the game.

Some lottery players state that winning prizes had a negative impact on their lives. But Richard said he never experienced any downsides to winning.

What Did Richard Lustig Do With The Money?

Richard bought many luxury items after winning his prizes. He bought a Jaguar, a Harley Davidson, and a $350,000 house with a library. Lustig and his family also went on many expensive holidays together. He also invested a portion of his winnings and spent some of his cash buying more lottery tickets.

Where Is Richard Lustig Now?

Richard Lustig had an interesting life after winning the lottery. He spent his time developing software called Lottery Maximizer. This software uses additional probability theory and some of Lustig’s own methods. He was also an agent in the entertainment industry.

Sadly Richard passed away in July 2018 at the age of 67. Although he had heart problems it was still a shock to everyone who knew Richard.

Before his passing Richard had a Twitter and Facebook account where he promoted his book and gave extra tips on how to use his methods. Even though there was a statement that his family would take over his lottery enterprises there have not been any new posts on his social media accounts since his passing.

Richard Lustig wrote a book called Learn How To Increase Your Chances Of Winning where he explains the methods he used to win the lottery. The book was a huge hit and became a best-seller even though it was a mere 40 pages. His book sold for $40 a copy.

On the other hand, after some time Richard’s book was under scrutiny from readers. Many people say that the book isn’t worth the money and it doesn’t provide useful information. There are also readers that say the book was misleading.

Lustig’s book is still available on Amazon, but I’d advise reading the reviews on the book first before you decide to buy it.

What is Richard Lustig’s method?

Richard Lustig never opted for quick picks. He always chose his numbers manually. He also played the lottery consistently every week. Furthermore, he used the same numbers over and over again until he won using his combination.

Richard Lustig suffered from severe heart problems. He passed away in 2018 at the age of 67. He left behind a wife of 32 years and two children. Lustig is still well known and many people still talk about his seven lottery wins to this day.

How much money did Richard Lustig win?

Richard Lustig won relatively large prizes that all added up to over $1 million after taxes. His largest win was $842,152.91.

If you ever find articles on the biggest lottery winners you’ll always find Richard Lustig featured in it. He dedicated much of his life to playing the lottery and even re-invested some of his winnings to buy more lottery tickets. Richard also developed a lottery software to help people increase their chances of winning and even wrote a book about his methods.

Although Richard’s lottery strategies worked for him they may not work for someone else. If you do decide to use his methods it’s advised to set a budget for your lottery tickets. It should also be noted that Richard didn’t win every time he played. He played consistently until he won.

Did you find Richard’s story inspirational? Would you ever try using his methods? Let us know in the comments below.