Lottery Taxes will vary depending on the country you live in. In some countries taxing lottery winners is illegal and in other places, the taxes can be as high as 25%. For some players, it’s important to check tax information on these lotteries especially if they’re playing to win big.

If you’re one of those players that strive to win the jackpot then you may want to check what the tax regulations are for your favorite games around the world. Checking the tax for lotteries will help you calculate how much you’ll get paid out if you win the lottery.

How Are Lottery Winnings Taxed in Europe

Europe is a large continent with 44 countries that are divided into different regions. With that being said, lottery taxes will differ from country to country and every authority will take a certain portion off the jackpot prize. European lotteries are some of the biggest in the world. You can play:

However, the organizations don’t determine the taxes, the countries and their governments do. In Greece, players will be taxed 10% of their winnings. This percentage isn’t simply for jackpot winners but for all winnings even if it’s $2.

On the other hand, Portugal taxes 20% and Poland tax 10%. The highest is Romania with a 25% tax and the lowest in Italy with 6%. If you play the lottery regularly the best places to play are the UK and France.

One of the more popular European lotteries is the UK’s National Lottery. The lottery pays out winnings as a lump sum and doesn’t charge taxes no matter how big the prize is. This is because the UK betting companies are responsible for paying taxes.

However, there are various taxes when you bank your winnings. Your winnings will form part of your estate and may be liable for 40% inheritance tax. But this is only if it takes the value of your estate above the current threshold of £325,000.

How Lottery Winnings Are Taxed in The USA

The United States of America is a large country that comprises 50 states. Each state has different regulations on lottery taxes. These taxes range between 10% and 25%. Additionally, the reason lottery winners are taxed in the US is so the government can fund various initiatives.

In the USA Winners Pay State & Federal Taxes on Winnings

The IRS considers net lottery winnings ordinary taxable income. This means you’ll pay federal and state taxes before you receive your winnings. You will be charged 25% federal tax. Additionally, you will owe the rest when you file for taxes in April and the amount will depend on your tax bracket (amount of your winnings) and sources of income.

The amount of state tax you pay will depend on the state you live in. Some states have higher tax percentages compared to others. These percentages can range between 8% and 13% depending on where you live. However, there are some states that don’t charge state taxes such as Alaska and Nevada.

If you bought your lottery ticket in one state and you live in another, you will be taxed according to the regulations in the state where you bought the ticket.

Taxes On Lottery Winnings by State in 2022

As You can see in the image below that each state has a different percentage when taxing lottery winners. You’ll be taxed on your winnings regardless of whether you take out a lump sum or annuity option when you win the jackpot.

Vermont charges higher taxes of 8.75% whereas New York has the highest percentage of 8.82%. The state with the lowest tax is North Dakota sitting at 2.90%. Pennsylvania is the second-lowest with a tax of 3.07%. 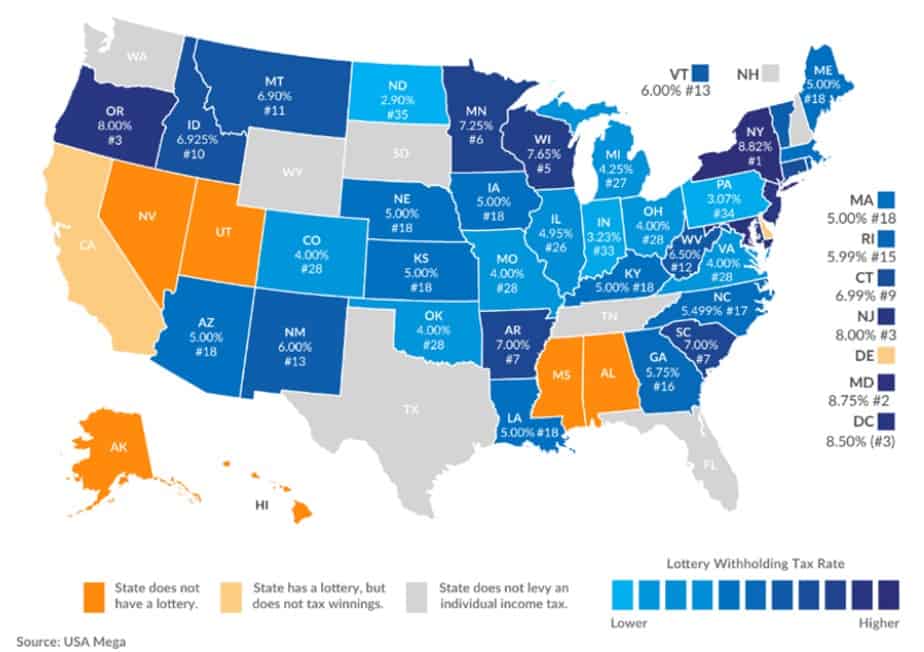 The States That Do Not Levy an Individual Income Tax

As mentioned before there are states that don’t levy an individual income tax. These states are:

The States with the Highest Taxes on Lottery Winnings:

There are some states that have incredibly high state taxes with New York being at the top. So you may want to avoid buying lottery tickets in these states if you don’t want to pay higher taxes on your winnings.

How Lottery Winnings Are Taxed Around the Globe

In Austria, there is a company called Casinos Austria that owns casinos and lotteries in the country. The company was founded in 1934. Winners aren’t taxed on their jackpot winnings because it doesn’t fall under the seven types of income tax. Instead, the Casino Austria company pays the tax on lottery winnings.

Oz Lotto which is an Australian lottery is owned by Tatts Group. The organization was founded by George Adams in 1881 in Melbourne. In Australia, lottery winnings are considered tax-free income and therefore winners won’t be taxed on their prizes.

The Western Canada Lottery Corporation is a Canadian non-profit organization that was founded in 1974. This organization operates lotteries within Canada. As a jackpot winner, you get to keep the entirety of your prize because lottery winnings aren’t considered taxable. Lotteries such as Lotto Max or 649 are considered windfalls and therefore aren’t subjected to tax.

In Denmark, the lottery provider is responsible for paying taxes. This means there are no tax obligations for winners. Denmark’s lottery is regulated by Det Danske Klasselotteri. The lottery was launched as the Royal Copenhagen Class Lottery by the Royal Orphanage and was established in 1753.

The most popular lottery in Germany is LOTTO24 and is owned by The ZEAL Group. This organization was founded in 1995 and was originally developed to modify computer software. Although there are strict income tax laws in Germany, the country doesn’t tax lottery winnings.

Are gifts from lottery winning taxable?

There is no limit on the amount you can give family or friends from your lottery winnings. However, any amount of money gifted above your annual allowances could be subject to inheritance tax

Yes, whether you choose the annuity or lump sum, both options are taxable. The annuity option pays you out 30 payments. Each payment will be taxed based on the tax rates in your state or country.

Are your lottery taxes charged before you receive your winnings?

Yes, your prize money will be taxed before it’s paid out to you. This will include federal and state taxes.

Now that you know how lotteries tax winners per country you can choose which games to play wisely. If you don’t want to get taxed on winnings then you can choose one of the lotteries that don’t charge lottery taxes such as Australia or Denmark.

On the other hand, if you live in the USA, make sure you know which state has the highest taxes so you can avoid buying lottery tickets in that region. Use this article to guide you on which lotteries in the US charge higher federal and state taxes. Or choose one of the countries mentioned in this article with the lowest taxes.

For some people, playing the lottery is a hobby or a profession. If you want to play the lottery as a hobby then use this guide to help you with information on tax per country or US state.

Guides
Cheap Lottery Tickets: Where to Get Them?
2 weeks ago
0 1749

Guides
How Long After Winning The Lottery Do You Get Your Money?
2 weeks ago
0 1745
Editor’s Pick